“It requires less energy to ventilate a greenhouse using natural ventilation compared to a mechanical ventilation (fan-operated) system,” says AJ Both Ph.D., Extension Specialist at Rutgers. “All you need is strategically placed openings (vents/windows) and a way to open and close them,” which he says is typically done with an electric motor.

However, in regions of the country where it is hotter and less windy, mechanical ventilation may be the preferred choice for growers.

From the Netherlands to New Jersey

Both says that in the Netherlands, which is approximately 52 degrees latitude, almost all greenhouses use natural ventilation. He says they get less solar radiation and more westerly winds than a location like New Jersey where he lives and works.

And then there is the issue of insect control. With mechanical systems insects are more likely to get sucked in so the use of insect barriers is required, this is less of a problem with natural ventilation, says Both. 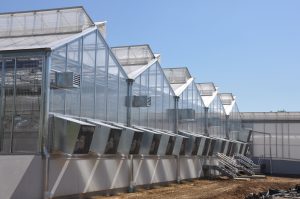 Like opening the windows in your house on the first warm, spring day, the breeze from natural ventilation is good for the inhabitants of the indoor environment, whether it be plants or animals.

“While automated natural ventilation systems do add costs for growers and producers, they often greatly improve the environmental conditions for the crops or animals inside,” says Both. “More and more operators are embracing these systems.”

Without adequate ventilation, the humidity will build up. Transpiration and condensation that occurs naturally as part of the water cycle increase humidity levels with a thermally dynamic structure. High humidity levels in a greenhouse invite pathogens, molds, and fungi that can interfere with plant growth. With an automated ventilation system, humidity control can be achieved by replacing wet warm air with cool, dryer air as needed.

The physics behind natural ventilation

Both says natural ventilation is based on two physical principles: thermal buoyancy (the chimney effect) and the effect of wind. He says that thermal buoyancy results from differences in air density: warm air is less dense and will rise relative to colder air.

“If you have a fireplace you know how this works,” says Both.

The wind effect results from air movement around structures from outside. The wind creates small pressure differences–an excess positive pressure on the windward side of the building and a lower (negative) pressure on the leeward side.

“By using strategically placed vent openings we can make use of these pressure differences to move air through the structure. The wind effect is typically the dominant force that we rely on in natural ventilation systems.”

Since the wind effect is typically the dominant effect, and wind speed and direction are often highly variable, it is not always easy to predict which vent opening is serving as inlet and which one is the outlet. In fact, an opening can serve as an inlet and outlet at the same time (different parts of the vent allow air to enter or exit the structure).

“We typically put vents at the top of the structure (roof) and near the ground (sidewalls) to get the highest potential air exchange rate,” says Dave Stoltzfus, President, Advancing Alternatives.

Advancing Alternatives has you covered.

Of course, any system–natural ventilation or mechanical–it is only as good as the environmental controls an operator is using. Advancing Alternatives has the technology and the expertise to equip your facility with the proper environmental controls so you that your greenhouse is running as efficiently as possible, saving you time and money.

Advancing Alternatives provides the expertise and equipment to get the most out of your greenhouse regardless of the ventilation system you are using. They have the latest innovative products for greenhouses, including curtains and vents, motors, light deprivation supplies, zig-zag wire, and quality Aegis controllers.

“Advancing Alternatives has been very helpful in providing growers with an array of equipment and solutions for the various growing structures used around the industry, including animal structures,” says Both.